It was rumored for days that Nikos Zisis would not continue his career with CSKA Moscow and now it is official. As it was announced in the club's website, both parts mutually agreed to break the player's contract.

Zisis is reported to have agreed with both Olympiacos and Montepaschi Siena, with the latter having the edge for offering a better contract and more playtime opportunities to the player.

Here is the club's official anouncement:

"Guard Nikos Zisis and our club agreed to terminate the contract of the player. The Greek has the free agent status.

“Our parting was dictated by the new strategy of the club, and it was difficult for us to take the decision. In two years with CSKA Nikos has became an integral part of the team, he played an important role in winning the Euroleague in 2008, winning two Russian League titles. He demonstrated huge desire to work and improve, the ability to relate with his teammates both on and off the court. I wish Nikos good luck and wins with his new team.”

“CSKA is one of the most professional club in the world, and I am grateful for the way the club treated me and my girlfriend in this two years. I can assure you that I had a desire to give more to the team, and I did my best. Anyway I will have the best memories about Moscow and CSKA. We were the team which was always playing on a highest level. Also I will never forget the Euroleague title which was the first in my career. I wish CSKA and all my former teammates best of luck.”

It is also said that Alexey Savrasenko will follow the same path and will persue a career elsewhere. He also holds a Greek passport, but it is unlikely he will continue in Greece, as the two powerhouses seem to have all center spots filled and the player's salary demands are too high for any other Greek club to afford him. 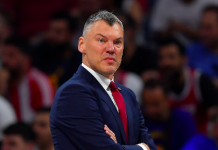