James Worthy recently discussed what it was like to play for head coach Dean Smith during his time at the University of North Carolina.

“Dean was different. He was by the book. People don’t believe me when I say that, but it wasn’t no money involved. He gave Michael Jordan the science and the theory of the game that he needed. So that’s what you walked into. Everybody was treated the same, from the towel boy to anybody. He believed in being on time. He didn’t allow you to swear. He didn’t swear. He was old school, old school discipline. And if you were willing to lay your ego down and create that team, he taught you how to be a team person and really prepare you to be a citizen. He used his platform as a basketball coach to kinda lift you up.

“And the way you can tell, you got Sam Perkins, MJ, me, Vince Carter, and all them brothers. But then you look at some of the brothers that didn’t make it, they are doing OK because he kinda prepped you to get ready for life. So I always appreciated that about Coach Smith. He was always conscious away from the court. He fought for a lot of different things, which made him much respected from the players who played for him and people outside the program as well.”

James Worthy on what problem Lakers need to address Mike Woodson looks back at Indiana vs. UNC history after big win: “It’s always been a battle with this team” 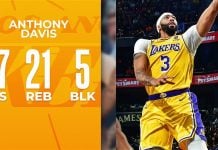 James Worthy on Anthony Davis: He seems to have found the groove