Kristaps Porzingis reached a milestone in game against the Timberwolves as he scored career-high 41 points. One top of that the Wizards won the game (142-127).

After the game the Latvian forward received a surprise celebration from his teammates who poured water on Porzingis.

Bradley Beal took to Twitter express the approval of his teammate. “@kporzee = HIM,” he tweeted.

This season Porzingis is averaging 21.4 points, 8.2 rebounds and 2.6 assists in 32 minutes per game. 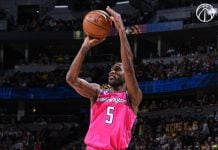 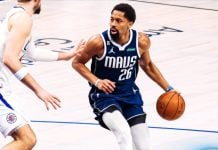