The Detroit Pistons appear to be exploring possibilities around Saddiq Bey.

Added by Fischer, this move by Detroit marks their intent on “further evaluating Bey” this season, as they are yet to truly consider and entertain his market value.

Bey has established himself as one of the Pistons’ young core members along with Cade Cunningham, Isaiah Stewart and Jaden Ivey. But this season, he had minimal decrease in scoring numbers (14.7), rebounds (4.8) and assists (1.6) so far if compared to his output last 2021-2022.

With veteran wing Bojan Bogdanovic emerging and taking his job of providing needed scoring punch for the club, Bey eroded and also had unreliable shooting splits on the field (40.8 percent) and three-point line (29.0 percent in 5.5 attempts averages).

Bey will be rookie scale extension eligible following this season. As such, the Pistons have plenty of conditions to weigh if they are truly optimistic and eager enough to have him on a long-term vision. Mavs, Heat, Nuggets among teams that frequently connect with Pistons about... 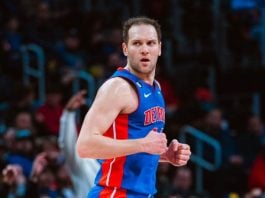