For the fifth straight game LeBron James had to watch the Lakers play from the bench. A left adductor strain has kept the four-time NBA champion from action. This time he watched his team lose against the Suns (105-115).

However, Chris Haynes reports that James is set to return to the court for his team’s next game on Friday against the Spurs on the road. 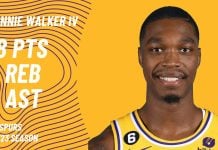