After a slow start of the season, Warriors star Klay Thompson exploded with 41 points in a win against the Rockets.

The four-time NBA champion is having his worst season in terms of shooting, but this time he made a whopping 10/13 three-pointers (14/23 field goals).

Thompson has been getting criticism amid his struggles, but he never allowed the critics to get the better of him and stayed confident in his abilities to turn things around.

Via Marcus Thompson II of The Athletic:

“I don’t care anymore,” Thompson said. “I really let the trolls get to me. Like, ‘What am I doing?’ I had just a revelation where I was like, ‘Man, just be you and everything will play out.’ Criticize me all you want. But I know how great I am and what I’m capable of, and I think real Warriors fans know that as well.” 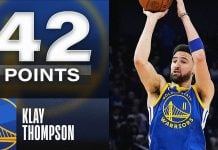 Klay Thompson: “I will be an All-Star before it’s all said and done again at least”