Former NBA champion Dwight Howard made his debut with the Taoyuan Leopards in Taiwan.

The 36-year-old center was close to a triple-double as he racked up 38 points, 25 rebounds, 9 assists and 4 blocks for his new team.

His performance was capped with a win over the New Taipei CTBC DEA (120-115). 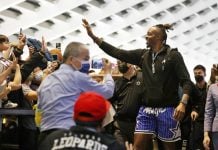