Knicks newcomer Jalen Brunson tied his season low in terms of scoring as he had 13 points in a loss against the Warriors.

The 26-year-old point guard took full responsibility for his performance in postgame interview, saying that he played terrible.

“I played terrible. That’s the focal point of it. I played terrible,” Brunson said, per Fred Katz, adding that he was referring to everything, not just certain phases of the game 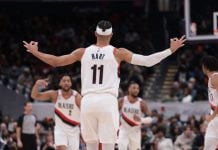