Klay Thompson, who is known as one of the best shooters in the game, has been struggling with shot so far this season.

His shooting percentages are the worst of his NBA career – 35.1% of field goals and 33% of three-pointers. According to the Warriors head coach Steve Kerr, the 32-year-old shooting guard is not relaxing enough and his shooting woes are self-inflicted.

“In some ways right now Klay just has to get out of his own way and free himself up and just play, enjoy the game instead of wrapping himself up in every single shot,” Kerr said, per Kerith Burke, adding that “He just needs to just relax and go play.”

This season Thompson is averaging 15.1 points, 3.5 rebounds and 2.4 assists in 28.7 minutes per game for Golden State. 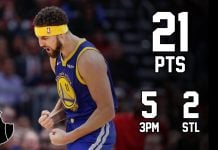