In the clip below, former Los Angeles Lakers player Matt Barnes weighed in on the potential of trans women being allowed to play in the WNBA and why he doesn’t support the idea.

Like many pro athletes, former and current, Matt said it’s a line that shouldn’t be crossed to maintain the integrity of the game.

He also reacted to his boy Gilbert Arenas’s story about his daughter playing basketball against a trans girl athlete: 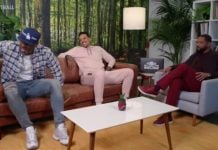