The Toronto Raptors have officially signed Josh Jackson, the team announced on Tuesday.

The said deal, as reported by Alberto De Roa of HoopsHype, worth around $2.3 million, but non-guaranteed. It’ll become fully-guaranteed once he lasts in the roster on or before Oct. 17.

Other than him, Dalano Banton, Justin Champagnie, and D.J. Wilson will have their contracts guaranteed if they still remain with Raps on the said date.

Jackson, 25, was drafted by the Phoenix Suns for the fourth overall pick of 2017 Draft.

He split his 2021-22 season with the Detroit Pistons and Sacramento Kings. 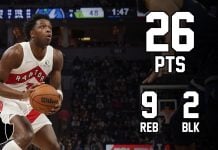