Serving the land of the free stands as a priority for now, but the thoughts of going back from the NBA remains stuck in the minds of both Patrick McCaw and Norris Cole.

The two are fielding the star-less Team USA basketball this summer, wherein they are set to join the FIBA AmeriCup tournament which will officially commence this Friday.

“I think it’s more about representing the USA for me right now,” said McCaw, via Associated Press’ Tim Reynolds. “I want to make it back to the NBA. I know that’s a process. And I know one day, whenever, next week, next month, next year, when it’s supposed to happen, it’ll happen. But right now, I’m just focusing on this USA, wearing these three letters, giving my all to this team and representing the United States of America.”

McCaw, who was drafted as the 38th pick of the 2016 Draft, had a blooming start in his NBA career. Chosen by the title-ready Golden State Warriors, he won back-to-back championships with them in 2017 and 2018. The following year, he went on a personal three-peat by being a component of the Toronto Raptors’ championship run, beating the Dubs in six gruelling games.

Fast forward this 2022, McCaw is nowhere to be found in the league right now, as he is hoping that this service for the U.S. would give a great purpose of granting his desire to make a way back in the association.

Other than him, Cole is also out there waiting for a new opportunity – a call up from any of the 30 teams within the NBA.

“I still have the ability,” said Cole. “God has still blessed me with the ability. I still have the fire, the hunger and I still feel like I have something to prove, things that I would like to accomplish as a player. That feeling of winning a championship, the mission, the goal, the work to try to get to that point again, that’s what drives me as a competitor. And I want that feeling again.”

Like McCaw, Cole landed in a blessed place as a rookie in 2011, wherein he shared the court with LeBron James in his previous years in the Miami Heat.

Cole went on to three-straight Finals appearances with the Heat dynasty, while winning the first two titles with them in both 2012 and 2013.

In 2017, he left to take his talents overseas, hoping to be back. But it’s been five years and a call remains elusive.

“We’ve been around winning,” Cole said. “Patrick has that working for him. He knows what winning looks like and anytime you’re around winning it rubs off on you. He has that, he has a fun personality, and I think he definitely deserves another shot. I definitely believe that he deserves to be on an NBA roster.” 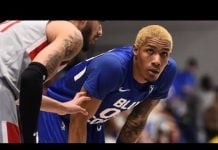 Norris Cole: “I still have the ability”