In recent weeks reports came out suggesting that the Celtics were willing to include Jaylen Brown in a potential trade for Kevin Durant.

It came out as a surprise since the 25-year-old shooting guard, along with Jayson Tatum, are the cornerstones of the Boston team. Brown’s teammate Grant Williams thinks that he is mature enough to handle the rumors the right way.

“I feel like he’s mature in his mindset … I talk to him, texted him, reach out as often as I can. It’s one of those things, it’s the league, it’s a business, it’s not something to be discouraged by. We love JB,” Williams said, per Bobby Manning. 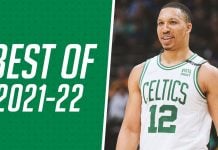