The Detroit Pistons are gearing up for the hunt towards getting Deandre Ayton.

Following their shipping of Jerami Grant to the Portland Trail Blazers and the clearing of roughly $43 million in the salary cap, the Pistons are “heavily expected” to pursue the embattled Phoenix Suns center this upcoming free agency (h/t The Athletic’s James L. Edwards III).

After the Suns didn’t offer him a max rookie extension last 2021 offseason, Ayton is poised to become a restricted free agent this summer. As such, it gives the team a right to match any offer that the big man will receive from several teams around the league.

But there are rumblings around multiple sources that suggest that Ayton will likely leave Arizona this offseason. He had the last season’s average of 17.2 points, 10.2 boards, and a career-high 63 percent shooting for Phoenix, who miserably crumbled in their seven-game, second-round series against the Dallas Mavericks’ last playoffs. 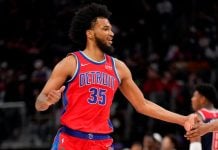