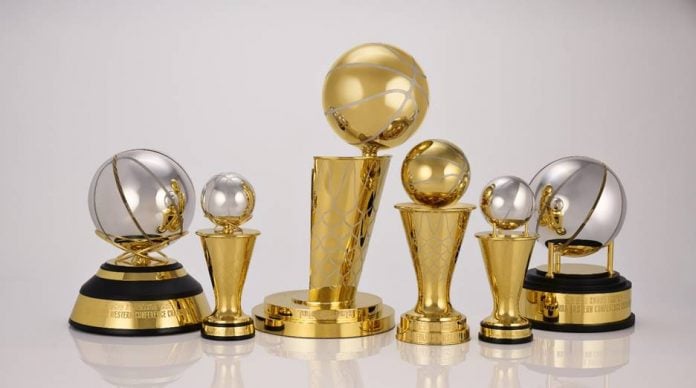 NEW YORK, May 12, 2022 – The National Basketball Association (NBA) today unveiled a lineup of reimagined trophies for the NBA postseason, including an evolution of the Larry O’Brien Trophy, awarded annually to the NBA champions. The six trophies, designed in collaboration with artist Victor Solomon and Tiffany & Co., are named after NBA legends who have helped shape the league and represent the standards of postseason excellence.

The NBA’s relationship with Tiffany & Co. spans 45 years, with the American luxury house having designed and manufactured the Larry O’Brien Trophy since 1977, the league’s conference championship trophies since 2001 and the Bill Russell Trophy (NBA Finals MVP) since 2005. Tiffany’s legendary “Makers” – the skilled craftspeople at its hollowware workshop in Cumberland, Rhode Island – bring to life more than 65 trophies each year in addition to hundreds of other designs they also produce at the workshop. Solomon worked in tandem with Tiffany & Co. to evolve the NBA’s postseason hardware offerings, refreshing how the league’s champions will be honored for the next 75 years and beyond.

The league’s championship trophy, named after Larry O’Brien since 1984, honors the NBA’s third commissioner, who oversaw the NBA’s absorption of four ABA teams and the elevation of national broadcast agreements. The trophy stands 25.5 inches tall and weighs approximately 30 pounds, with its latest iteration evolved in three key areas:

The NBA Finals MVP award, named after Bill Russell since 2009, honors a legend who won a record 11 NBA championships in 13 seasons. The Bill Russell Trophy, which remains 17.25 inches tall and weighs 11 pounds, is now finished completely in gold vermeil to match the Larry O’Brien Trophy, and features similar masking to reveal the net and basketball channels

The NBA is naming its conference champion trophies after two NBA legends, Bob Cousy and Oscar Robertson, for their outstanding contributions on the court and the impact they made as early presidents of the National Basketball Players Association (NBPA).

Nicknamed “Mr. Basketball” and “The Houdini of the Hardwood” for his revolutionary playmaking ability, Cousy has been named to every Anniversary Team in league history (25th, 35th, 50th and 75th). He is a six-time NBA champion, an NBA MVP, a 13-time NBA All-Star selection, a 12-time All-NBA Team selection and a two-time NBA All-Star Game MVP. As the first president of the NBPA, Cousy was instrumental in securing important benefits for his fellow players.

“I have been part of the NBA family since 1950 and among the greatest joys of my post-playing career has been watching the game continue to evolve into what it is today,” said Cousy. “There are few greater achievements in sports than representing your conference in the NBA Finals, and I’m moved that the NBA has granted me the honor of being connected to the Eastern Conference champions for years to come.”

Oscar “The Big O” Robertson was the first NBA player to average a triple-double for an entire season. An NBA champion, NBA MVP, 12-time NBA All-Star selection, 11-time All-NBA Team selection, NBA Rookie of the Year, three-time NBA All-Star Game MVP and member of the league’s 35th, 50th and 75th Anniversary Teams, Robertson is one of the best all-around players in the history of the game. Robertson was also the first African American president of the NBPA and played a pivotal role in reforming the NBA Draft and ushering in free agency.

“I am thrilled to have the NBA Western Conference Champions Trophy named in my honor,” said Robertson. “Several decades ago, I played in an emerging and highly competitive league with tremendous talent. This trophy represents to me not only my hard work to make the league better, but all the efforts of the future Oscar Robertson Trophy™ winners who make the NBA great.”

Larry Bird and Earvin “Magic” Johnson helped define the modern NBA with their individual brilliance and team success in the 1980s. Together, Bird and Johnson’s bicoastal rivalry captivated fans and played a critical role in elevating the league to new heights. The two NBA legends are honored as the namesakes for the trophies that will now be awarded each year to the Eastern and Western Conference Finals MVPs.

“The NBA Conference Finals represent the last hurdle a team must face for an opportunity to make it to the big stage, the NBA Finals,” said Johnson. “I’m truly honored to have my name memorialized on the Western Conference Finals Most Valuable Player Trophy. This player excels on both ends of the court, makes his teammates better and leads his team to the greatest stage in basketball.”