Indiana Pacers saw three players getting into the NBA’s health and safety protocols. According to ESPN’s Adrian Wojnarowski, Caris LeVert, Goga Bitanzde and TJ Warren became the latest players to land in the protocols.

Warren has yet to play this season amid rehab from a foot injury. Warren averaged about 20 points in his last full season, shooting a career-best 53-percent from the floor and a stellar 40-percent from the three-point range.

LeVert is among the leading scorers for the Pacers along with Brogdon. This season, he averages 17.8 points, 4.0 assists and 3.3 rebounds through 28 games.

Indiana is at 14-22 playing against Cleveland tonight. They are on a 3-game losing streak, as they got beat by the Bulls (twice) and Hornets in the last three contests. 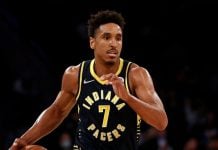