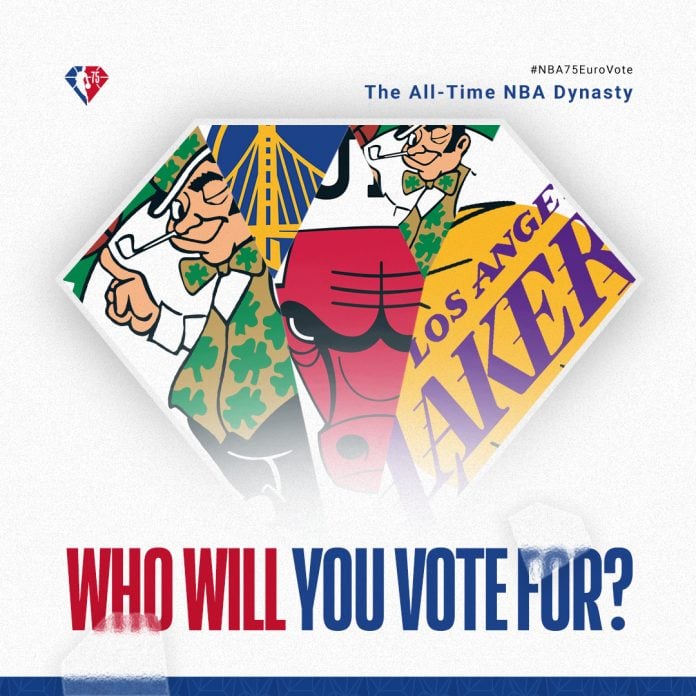 LONDON, Nov. 23, 2021– The National Basketball Association (NBA) today announced the launch of “NBA 75 Euro Vote,” a campaign to celebrate the league’s landmark 75th Anniversary Season with fans in Europe and commemorate the contributions of European players throughout the league’s 75-year history.

The NBA 75 Euro Vote will pay tribute to current and former European players who have inspired generations of basketball fans across the continent. During the 2021-22 season, a blue-ribbon panel of European media, influencers and celebrities will join fans from Europe in voting for the 10 best European players of all-time who will make up the All-Time NBA European First and Second Teams. Panelists and fans will vote from a list of players born or raised in Europe, from the early pioneers to current superstars. Additional voting categories will include the All-Time European NBA Moment, All-Time NBA Jersey, and an All-Time NBA Dynasty from a selection of the greatest teams in NBA history.

Since yesterday, fans across Europe are able to participate by voting for the first open category, the All-Time NBA Dynasty, at NBA.com/Eurovote with the results to be unveiled Tuesday, Nov. 30. Additional voting will take place for the All-Time NBA Jersey (December 14-20, 2021), All-Time European NBA Moment (February 28 – March 7, 2022), and All-Time NBA European First and Second Teams (March 28 – April 10, 2022). For all categories, the fan vote will account for 50 percent of the final results while the panel will make up the other 50 percent.

“European players past and present are part of the fabric of the NBA, from the earliest pioneers to the current roster of All-Stars and MVPs who are among the best players in the game,” said NBA Head of Fan Engagement and Direct-to-Consumer for Europe and the Middle East, George Aivazoglou. “In celebration of European players and their generational contributions to the league, we are excited to launch the definitive vote for the top European players of all-time as well as a range of activities and content to engage fans across the region through our landmark 75th Anniversary Season.”

Below please find the list of media, influencers and celebrities participating in the NBA 75 Euro Vote:

For the latest details on NBA 75 celebrations, including opportunities for fans to participate, visit NBA.com/75 throughout the 2021-22 season.

Seth Curry talks on his future with the Philadelphia 76ers