After the defeat of Buducnost (87-81), Justin Cobbs was surprised by the excellent performance of Mega Mozzart in Round 7 of the AdmiralBet ABA League in Belgrade.

“We didn’t expect this. They had more energy, played well, made shots and too many offensive rebounds. And that was the reason the final score was like this.”

Buducnost is one of the three clubs from the ABA League (the other two are Partizan and Cedevita Olimpija) that participate in the EuroCup, so Cobbs made a comparison between these two competitions.

“EuroCup has a little more experienced teams, the competition is little better, but ABA League is getting stronger. Everyone plays hard. A lot of aggressive teams there. And when you are one of the better teams in league everyone wants to play its best game against you. So you always needs to come ready. And we didn’t come ready today.”

Buducnost doesn’t have a lot of time to prepare for the next game and they will fly to Italy directly from Belgrade to face Umana Reyer Venice. And even though they don’t have much time for preparation, Cobbs is expecting that he and his teammates give their best.

“We need team game, to want to win, and I think our opponent wants the same. They want to prove themselves, to protect home court. They will come with a same mindset, to beat one of the best teams in EuroCup. So we have to be ready and master our intentions.”

As Cobbs emphasize, for now, Buducnost is one of the best clubs in EuroCup, the only unbeaten club in Group B after three rounds.

“I think this loss wakes us. Nobody expected us to lose today, we didn’t expect to lose today. That is why I think this lose is maybe something we needed. To show us we are not untouchable, we’re beatable. So I hope this was a wake up call for us, that we will come up with a different mindset on Tuesday.”

Justin Cobbs, one of the best players of the club, is playing his third season for Buducnost and he feels it is his second home.

“I’m comfortable, I’m happy. I have been here for three years, everyone here is great to me. For me, this is the longest I have ever been in any club, so Buducnost is like second home for me. I am just trying to play well, to stay healthy and hopefully keep doing great things.” 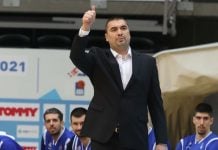