The Chicago Bulls have announced they have signed former NBA player Joakim Noah, who will become an ambassador for the franchise.

Noah spent nine years with Chicago (2007-2016) and is excited for his return to the Bulls.

“I’m truly humbled to be honored by both the team and city that I have always loved and respected. Even more so to be able to celebrate tonight with family, friends, former players and coaches, and most of all – the Bulls fans who helped drive my energy throughout my years in a Bulls uniform at the United Center.

It means so much to me that I’m now a Bull for life. I love you all and am thrilled tonight to solidify my continued connection with the Bulls and the city of Chicago, in this new chapter of my life,” Noah said in a statement. 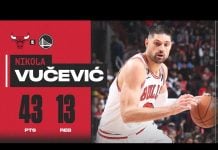