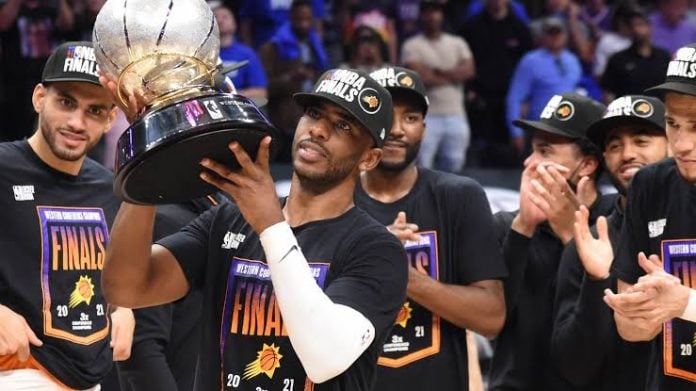 Entering the 17th season of his illustrious career as a professional athlete, Chris Paul is determined on what lies ahead.

And the last postseason run with the Phoenix Suns was one heck of a ride — giving a much-needed fuel for one of the all-time greats the game has ever seen.

Joining ESPN’s Sportscenter, the 36-year-old guard reminisced on the moments he had in his previous playoff exploits with the Valley.

“It was exciting, as long as I played in the league — to finally get an opportunity to go get a taste of what NBA Finals was like. It was big for myself, my whole team, my coaching staff and especially the Suns organization.”

When asked what pushed him to sign a new contract with Phoenix, CP3 said it was a family matter and, more importantly, about basketball.

“My family is in L.A. [Los Angeles], so being close to them, obviously, was a big part of the decision. But the biggest part is basketball. I love to play basketball [and] we have such a great family environment here in Phoenix. From all the guys on the team to the coaching staff, our culture is something that I really fell in love with and I’m happy to be here.”

Spearheading the Suns to its first playoff bid since 2010, Paul was phenomenal after tallying 19.2 points, 3.5 rebounds, 8.6 assists and a near 50 percent shooting in 20 games of appearance in the playoffs. Unfortunately, in the sixth meeting, they fell into the hands of superstar Giannis Antetokounmpo and the Milwaukee Bucks in the Finals round.

Looking to bounce back and claim their first-ever title, they will start the 2020-2021 season in a game against the Denver Nuggets on October 21.