Olympiacos triumphed over Real Madrid at Piece and Friendship Stadium in the Game of The Week of EuroLeague Round 2.

Olympiacos remained on top with a perfect record (2-0). On the other hand, Real dropped to 1-1.

In Kazan, Monaco needed an overtime to escape with a big victory over UNICS (80-88).

Mike James had the chance to hand Monaco the win, but made one free throw and missed the game-winning shot at the buzzer (74-74). In the extra period, the visitors outscored the Russians 6-14 to cruise to the victory.

Monaco climbed to 2-0 in the standings, whereas UNICS is at the bottom with an 0-2 record.

In a rematch from the 2019 EuroLeague Championship Game, CSKA Moscow endured the late comeback of Anadolu Efes and claimed the victory (96-100).

The Russians took control from the opening tip and led by double digits several times in the contest (59-75, 70-83). The Turks attempted a late comeback and cut the deficit to two (93-95).

But, they came up short and remained winless (0-2). On the other hand, CSKA Moscow won its first EuroLeague game this season and improved to 1-1.

ASVEL Villeurbanne rallied past ALBA Berlin in a late thriller (65-71). The French were in control from the opening tip and took a 14-point lead in the contest (43-57).

Yet, the Germans fought back. ALBA attempted to turn things around, but the visitors stood tall and sealed a big road win. The hosts are without a win in the EuroLeague, whereas ASVEL climbed to the top, at 2-0.

Armani Milano relied on its defense to cruise past Baskonia at Fernando Buesa Arena (64-78).

The Italians took control from late in the second quarter and never looked back (26-36). Even though the Basques tried to get back to the game, Armani comfortably retained its lead. 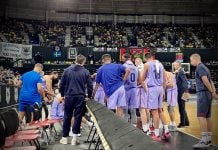 Day Five Of 2021 NBA Preseason: Under-The-Radar Players Who Stood Out

Olympiacos triumphs over Real Madrid in EuroLeague Round 2 Game of...

Joel Embiid out from Sixers’ preseason opener vs. Raptors

Brooklyn Nets Big-3 out vs the Los Angeles Lakers in preseason...