The Los Angeles Lakers will tip off their preseason with a big game against the Brooklyn Nets at Staples Center.

However, they will not be in full force on Sunday. Head coach Frank Vogel confirmed that four players will be out for the contest.

LeBron James, Carmelo Anthony, Russell Westbrook and Trevor Ariza will miss the game against the Nets. “There may be others, but as of right now those are the guys that we know will not play,” Vogel said, via Harrison Faigen of Silver Screen and Roll.

On the other hand, Anthony Davis will be available for the Los Angeles Lakers. Yet, he will most likely play only the first quarter.

As for the Nets, it is still unknown who will play and whether their Big-3 will have any playing time in the game. 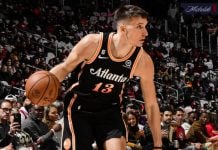