Draymond Green won his second Olympic Gold after Team USA defeated France in the final in Tokyo. The Golden State Warriors called out the sceptics on Twitter asking for old takes to resurface that predicted that the American would not win it all.

LeBron James, who has two Olympic Golds too, among other medals, reacted to Green winning his second. “Congrats Dray Day!!! My Brother” the Los Angeles Lakers star wrote on his Instagram story.

Despite past tensions, James and Green became friends as the two became clients of the same agency – Klutch Sports. 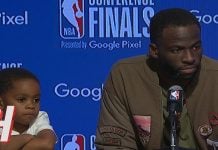 Draymond Green after Warriors win Conference title: “I’m not really the one that loves holding the trophy”