Golden State Warriors star Stephen Curry has opted against playing for Team USA in the Tokyo Olympics this summer, according to Shams Charania.

Curry had been deciding on participating over the last few weeks and USA Basketball expected him to be out of the available pool of players.

The 33-year-old now hasn’t played for Team USA since the 2014 FIBA World Cup.

Curry also withdrew himself from consideration for the 2016 Olympic Games due to ankle and knee ailments.

He joins other stars Donovan Mitchell, LeBron James, Anthony Davis and Jimmy Butler as players who have declined a Team USA invite. 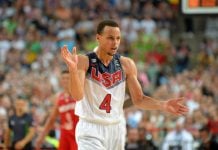 Steph Curry listed as ‘probable’ to play against Suns