Giannis Antetokounmpo and Khris Middleton kept the Milwaukee Bucks alive in the Eastern Conference semi-finals with the Brooklyn Nets.

The two stars combined for 68 points in the contest, with Antetokounmpo having 35 (and 15 rebounds) and Middleton 33 (and 14 boards), respectively.

Antetokounmpo and Middleton scored 68 of Milwaukee’s 86 points (79%), which is the highest percentage by a duo in NBA playoff history.

The Bucks survived a late thriller over the Nets in Game 3 (83-86), with Jrue Holiday and Middleton making clutch plays for the winners. For his part, Durant missed the game-tying three-pointer at the buzzer. 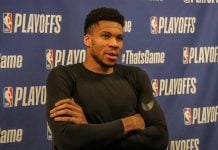 Giannis Antetokounmpo after Bucks reach Conference Finals: “The job is not done. We are halfway through”

Shaq on Ben Simmons: “If he was in my locker room...

Giannis Antetokounmpo after Bucks reach Conference Finals: “The job is not...

Trae Young: “We’re happy we made it to the Eastern Conference...