Vasilije Micic led Anadolu Efes to the EuroLeague Championship and was named MVP of the 2021 Final Four.

Micic had a game-high 25 points in the Championship Game and was the main reason for Efes’ triumph that brought them to the top of Europe.

The Serbian guard was also tremendous in the semifinal vs Armani Milano, while he was also named the MVP of the regular season in the EuroLeague a few days ago.

Micic and Efes made history on Sunday night and became EuroLeague champions for the first time ever. 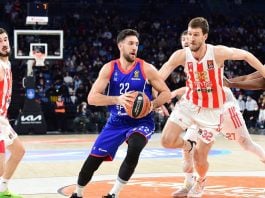 Vasilije Micic travels to Istanbul for the game vs. Turkey