Philadelphia 76ers survived the first game of the postseason prevailing with 118-125 over the Washington Wizards to start their playoff journey.

Tobias Harris had a huge impact in the game offensively for the home team exploding for a career-high 37 points shooting 15-of-29 against the Wizards’ defense.

For Wizards, Bradley Beal had a team-high 33-point performance adding also 10 rebounds and six assists. The two teams will meet each other again on Wednesday for Game 2 of the series. 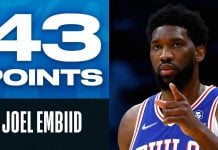