Over a Zoom in April, the Brooklyn Nets player Spencer Dinwiddie sat down with CoinDesk to discuss various topics including why NBA players are warming to crypto:

You’re at the intersection of the NBA world and the blockchain world. In the past year or so have you seen a change in the overall awareness of crypto from other players?

Yeah, a ton. Everybody’s got their attention and sights set on it right now. With the amount of investment capital that’s flying around right now, everybody wants in. They’re not even necessarily sure exactly to what degree or how they want in, but they just know they want in because they see what’s going on.

What do you think has catalyzed the players’ interests? Is it more the bitcoin price surge? NFTs? Top Shot?

Bitcoin probably made everybody pick their heads up and say, whoa. But [non-fungible tokens] are really what has everybody rushing in because anybody with a name or a certain fan following is rushing into the NFT market.

And I think it’s going to be interesting to see what happens because I do think NFTs are for real. But for people who kind of just throw out random NFTs as a cash grab … you’ve got to remember that these things also need an ecosystem to play in, you know? 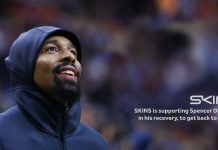 Spencer Dinwiddie: “Warriors actually offered Kelly Oubre for me and the Nets declined”

Spencer Dinwiddie thinks he will come back this season

How good was Charles Barkley actually?