American rap star J. Cole is signing a deal in the Basketball Africa League with Rwanda’s Patriots BBC, according to Shams Charania.

J. Cole, 36, will play three-to-six games, the first of which is on May 16 vs. the Nigeria River Hoopers.

J. Cole reportedly arrived in Rwanda two days ago and is currently quarantining in order to play, according to Marc J. Spears of The Undefeated.

Born Jermaine Lamarr Cole, the rapper was a walk-on at St. John’s, but he never played a Division I game once he shifted his focus to music.

J. Cole’s signing with Rwanda is expected to become official on May 13.

J. Cole has a new album titled The Off-Season dropping on May 14 and then he will make his professional basketball debut on May 16.

FIBA’s Basketball Africa League was formally introduced in March this year and there will be three groups of four teams participating in the league’s inaugural season. 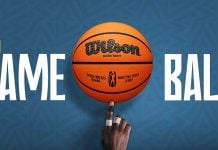 James Harden unavailable for Game 2 between Nets and Bucks