Bojan Bogdanovic was unstoppable during the game between the Utah Jazz and the Denver Nuggets leading his team to a 127-120 victory.

The sharpshooter registered a career-high 48 points on eight threes becoming the first Jazz player to put that type of scoring performance in the history of the franchise.

The Jazz hold the best record in the NBA improving to 49-18 after their win over the ‘red-hot’ Denver Nuggets. That was the fourth straight victory for Utah as Bogdanovic showed his ability as a shooter.

The wing from Croatia went 16 of 23 from the field with a career-high eight threes. He also registered eight rebounds to conclude his great performance.

According to ESPN, Bogdanovic finished with the highest single-game point total since Karl Malone had 56 points against Golden State on April 7, 1998.

Does Jazz’ Donovan Mitchell Have Plans To Show Up At Rucker Park Tonight? 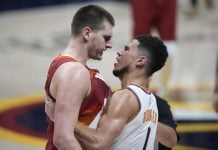