Ja Morant, who was named the 2020 NBA Rookie of the Year, continues to impress in his second year in the league. The 21-year-old point guard is averaging 19.1 points, 3.9 rebounds and 7.3 assists per game for the Memphis Grizzlies.

Recently, he was asked by the NBA legend Shaquille O’Neal where he ranks himself among the league’s point guard. “Top five, for sure,” Morant responded confidently. “Simple as that.”

Shaq and Dwyane Wade agreed with Morant’s assessment. “I would agree with that,” O’Neal said. “I like that. For sure, he’s there,” D-Wade added.

The Grizzlies are currently holding on a play-in tournament spot as they sit in the 9th place in the Western Conference with 32 wins and 32 losses.

Ja Morant reacts to his record performance vs. Utah: “We lost”

Ja Morant reacts to Memphis win over Utah Jazz: “If you don’t believe in yourself, who will?” 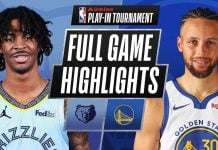