Stephen A. Smith shared his thoughts on the injuries of Anthony Davis and Kevin Durant, who have missed multiple games since February.

The NBA analyst ‘is getting suspicious’ with the injuries of Durant and Davis and said they could be more serious.

“I’m getting suspicious! Hasn’t KD (Durant) been out a little bit too long? I bring up KD and AD (Davis) in the same sentence. I mean, AD’s been out about 20 games.

What I’m saying is, my antennas are getting raised. I’m about to get nosey is what I’m trying to say. Usually, I’m just sitting back … but I’m getting suspicious.

It’s been a little bit too long with these injuries and I’m starting to feel that you know what? It’s worse than we’re being led to believe,” Smith said, via ESPN’s First Take.

Davis (right calf strain) and Durant (hamstring injury) have been out of action since mid-February. 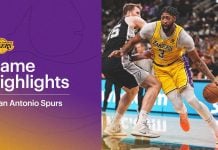 Russell Westbrook on Anthony Davis vs. Spurs: “He was big for us tonight”

Anthony Davis on his bench altercation with Dwight Howard