LeBron James had the chance to catch up with Golden State’s superstar Klay Thompson, after the finale of the game between the Lakers and the Warriors.

That was the last game between the Lakers and the Warriors this season, so it was the last chance for the players to catch up with their opponents bearing a playoff series.

Thompson and James were not shared the floor as opponents for almost one and half season, after Thompson’s consecutive severe injuries.

James finished with a triple-double registering 22 points, 11 assists and 10 rebounds to propel the undermanned Lakers to a 128-97 blowout victory. 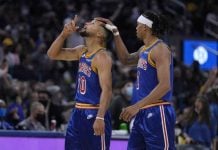 Russell Westbrook getting nothing but love from the OKC crowd