He’s had multiple negative test results and has been cleared to fly home with the team, according to Steve Popper of Newsday Sports.

About an hour before last game, the Knicks announced that Rose was unavailable to play.

As long as Rose produces negative test results in the next couple days, he will likely be able to play against the Detroit Pistons on March 4. 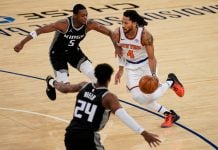 Derrick Rose may return soon for the Knicks, per report

Only 2 NBA players tested positive for COVID-19 before All-Star break, no positive cases since