Dallas Mavericks star Luka Doncic is doubtful to play Wednesday against the Oklahoma City Thunder due to lower back tightness.

Doncic remains scheduled to participate in the NBA All-Star Game and Skills Competition on March 7, notes Marc Stein of The New York Times.

If Doncic is ultimately ruled out, it will only be his second missed game of the season and players like Tim Hardaway Jr., Jalen Brunson and Trey Burke would try to fill the void.

Doncic was selected as an All-Star starter for the second consecutive season. 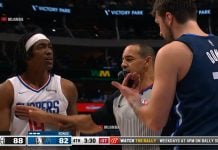