After being a late scratch on Feb. 8 due to entering the league’s health and safety protocols, Milwaukee Bucks guard Jrue Holiday won’t travel with the team to Phoenix.

There is currently no timetable for his return to the team.

Players in the health and safety protocol typically either were deemed a close contact to someone who tested positive for COVID-19 or they registered a positive or inconclusive test themselves.

Khris Middleton’s comments after the game gave an indication to what might have happened with Holiday.

“Once he tested positive, you immediately think about his health, his safety and then his family back home,” said Middleton. “He has little kids too that he has to worry about. So, I think that was a huge part of what was going through my mind before the game. Just thinking about him and his family back home. Hopefully, the test may come back negative a couple more times and then it’s just a false positive. Right now, I think that’s the best-case scenario, but I’m sure he’ll be fine no matter what though.”

If Holiday did in fact register a positive test at first, it’s possible that he could then test negative multiple times for it to be a false positive, as Middleton stated.

In that case, Holiday could get clearance to return to the team sooner, possibly for the game against the Suns on Feb. 10.

If Holiday’s positive test is ultimately confirmed, he will likely be out for at least 10-14 days.

It’s not yet known if any of Holiday’s teammates will be involved in contact tracing, with more clarity on the situation likely coming in the near future. 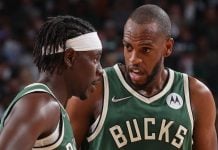 ESPN sportscaster Doris Burke calls out people underestimating the Bucks: ‘Can we stop disrespecting the champs?’