The Cleveland Cavaliers have used their hardship exception to sign point guard Yogi Ferrell to a 10-day contract.

The hardship exception allows a team to temporarily sign a player to its 15-man roster beyond the maximum of 17 players which includes two two-way players.

If he passes COVID-19 testing and protocols, he is expected to be cleared for Monday’s game against the Memphis Grizzlies, according to Chris Fedor of Cleveland.com.

Ferrell, 27, has a chance to immediately be in the rotation, as the team is dealing with injuries to guards Darius Garland, Collin Sexton, Dante Exum and Matthew Dellavedova.

In addition to those players, Kevin Love and Dylan Windler also remain out due to a calf injury and fractured left hand, respectively.

Teams can apply for the hardship exception if they have four players who have missed at least three consecutive games due to illness or injury and will be out for at least two weeks.

Exum has been out three straight games and is expected to miss one-to-two months with a strained right calf.

The Cavaliers received permission from the league to use the hardship exception on Monday morning, notes Fedor.

Ferrell played 50 games for the Sacramento Kings last season, averaging 4.4 points and 1.4 assists per game in a career-low 10.6 minutes per game. 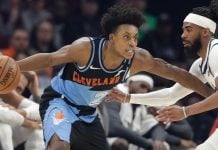