Marvin Bagley’s father took a shot at the Sacramento Kings during Saturday’s loss against the Houston Rockets asking the team to trade his son.

Bagley started at power forward but logged just 25 minutes and sat out the final 8:37 against the Rockets after picking up his fourth personal foul.

He finished the game with 12 points on 5-for-13 shooting, nine rebounds, two assists, and two turnovers. The Duke product was selected second overall in the 2018 NBA Draft.

Last season, the high-flying forward was limited to 13 games due to injuries. 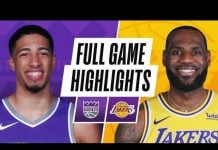