While appearing on the All The Smoke podcast hosted by former NBA players Stephen Jackson and Matt Barnes, the San Antonio Spurs star wing DeMar DeRozan opened up about his mental health struggles and discusses the impact of sharing his issues publicly.

DeRozan has played 11 seasons for the Toronto Raptors and Spurs. His career averages are 20.0 points, 4.4 rebounds, and 3.6 assists in 820 regular-season games. He has been selected to play in 4 All-Star Games. 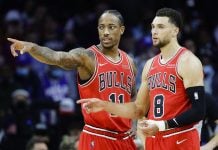 DeMar DeRozan confident that Bulls can win the title: ‘The ceiling is to win a championship’