The New Orleans Pelicans point guard Lonzo Ball is officially starting his own company separating himself from “Big Baller Brand”, the company of his father LaVar Ball.

Ball’s new company will be called “Born to Ball Inc’, according to the LA Sports Radio. The Pelicans guard will also come out with a line titled “ApolloZo”.

Ball joined the New Orleans Pelicans last season being part of the Anthony Davis blockbuster trade. He had a great season until the NBA hiatus putting up 11.8 points, 6.1 boards and 7.0 assists per game.

After Jrue Holiday trade to the Milwaukee Bucks, the third-year point guard is expected to have a bigger role in the Pelicans’ offense.

Ball is entering the last season of his rookie contract, and he is eligible for an extension in the coming month. However, Ball could also wait to test the market in the 2021 offseason as a potential restricted free agent.

CJ McCollum on New Orleans: “I want to retire here” 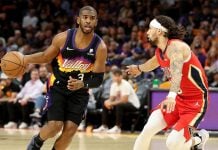 Monty Williams on Suns shooting in Game 5: “No matter where we play we take the ‘Let it Fly’ mentality with us”