The deal reportedly includes a clause to reach the $195.6 million super max.

His new deal will go into effect for the 2021-2022 NBA season, as Fox will play out the last year of his rookie contract this upcoming season. 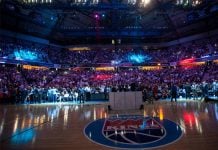