Bayern Munich continued its impressive run in the EuroLeague, as the German side claimed the 90-79 home victory over Valencia Basket.

Vladimir Lucic took over with seven huge points in the last two minutes of the contest. The Serbian finished the game with 22 points, seven rebounds and a career-high PIR of 35.

Paul Zipser followed with 20 points and JaJuan Johnson added 17 points and eight boards. Valencia managed to tie the score (74-74) with five minutes to go in regulation.

However, Andrea Trinchieri’s squad made a 16-5 run to end the contest and claim a vital home win.

Klemen Prepelic helped the Spanish club climb back into the game with 18 points and five assists.

Bayern improved to 6-2, while the visiting team dropped to 4-3. 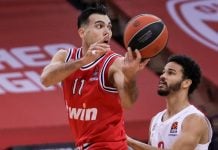 Tyronn Lue not sure if Kawhi Leonard, Patrick Beverley will join...

Metta Sandiford-Artest on how he bonded with Kobe Bryant through how...

Frank Vogel had no expectations for the Lakers in the start...

Matt Barnes: Kobe Bryant kept his ‘Mamba wall up’ on the...

Shaquille O’Neal reflects on his special bond with Kobe Bryant