Myles Turner could see a change in his role if he remains with the Indiana Pacers, according to IndyStar’s J. Michael.

Under new head coach Nate Bjorkgren, Turner could be used in a different way both offensively and defensively.

However, it remains to be seen whether Turner will stay with the Pacers next season, as Indiana has engaged in trade talks with other teams regarding the big man.

Turner is in the second season of the four-year, $80 million deal he has signed with the Pacers. 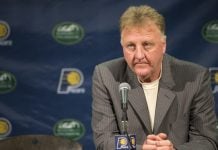