Devin Booker will remain with the Phoenix Suns due to his contract, according to an NBA executive.

Booker has four more years left on his current deal with Phoenix and it will be difficult to ask for a trade with ‘so much time left on his contract’.

“A league source also told HoopsHype there’s no truth to Devin Booker wanting out of Phoenix. Several executives who spoke with HoopsHype believe Booker won’t be going anywhere because of his contract situation and his talent as a franchise cornerstone at such a young age.

“He has no leverage,” one Eastern Conference executive told HoopsHype. “He’s locked up for four more years. There is no way for him to demand a trade with that much time left on his contract,” Mike Scotto of HoopsHype reports. 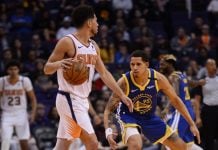 James Harden to make official debut with the Nets vs the...

LeBron James critical of officiating in loss to the Warriors