NBA players have selected New Orleans Pelicans’ Jrue Holiday as the recipient of the 2019-2020 Twyman-Stokes Teammate of the Year Award.

The award, which was voted on by more than 250 NBA players, is based on selfless play, on-and off-court leadership as a mentor and role model to other players and commitment and dedication to his team.

“There isn’t a more deserving player nor one that better embodies what this award signifies, on and off the court, than Jrue Holiday,” said Pelicans Executive Vice President of Basketball Operations David Griffin. “Jrue’s concern for and connection to his community is at the heart of everything we want this organization to represent. The work that he and his wife Lauren have done locally in New Orleans, as well as in Southern California and Indiana cannot go unnoticed, and his willingness to donate his full remaining salary following the restart of the 2019-2020 season to the ongoing fight for social justice further demonstrates what type of human being Jrue is. We are honored and grateful that Jrue is part of our Pelicans family.”

Holiday received 53 of 267 first-place votes and finished with 1,041 total points.

Warriors’ Stephen Curry lists the toughest defenders to guard him 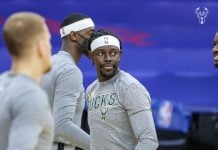 Jrue Holiday agrees to a 4-year contract extension with Bucks, per report

Kendrick Perkins calls Jrue Holiday ‘the most underrated player in the NBA’ after Bucks’ win vs. Lakers

Stephen A. Smith says the Lakers might not get past the...