The GOAT, Michael Jordan has answered the ice bucket challenge. But a certain somebody thinks that Kobe Bryant is better.

MJ DOES THE ICE BUCKET CHALLENGE

We’re just waiting on President Obama now and as far as celebrities go, that’s everybody.

BRANDON JENNINGS: KOBE IS THE BEST

Detroit Pistons point guard Brandon Jennings has taken to Twitter to say that Kobe Bryant is the best player that the basketball world has ever seen.

There is no doubting that Kobe is one of the best there has been and his list of accomplishments are there for all to see. Better than Jordan? Well, he thinks so.

MARSHON BROOKS: I COULDN’T IMPROVE IN THE NBA

He has arrived at EA7 Milano, and already MarShon Brooks has taken a shot at the NBA.

Brooks, who will play in Europe for the first time recalls his experience in the NBA.

“In high school I used to wear jersey number 11 but when I went to Providence the number belonged to Geoff McDermott who was a junior. I asked him for the 11, but he said ‘no way’. So I thought one plus one equals two. With that number I went to the NBA. Now it’s my number. This new experience is very exciting. I think it’s an opportunity to become a better player. I couldn’t improve in the NBA since there’s no time to really practice over there with four or five games per week. I think this is an opportunity to practice more and to really improve” 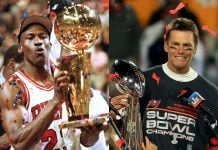