Head coach Mike D’Antoni addresses the media after the fourth-seeded Houston Rockets’ 107-119 loss to the fifth-seeded Oklahoma City Thunder in Game 3 of the 2020 NBA Playoffs on Saturday.

D’Antoni says the Rockets are not going to get down on themselves after the loss. Former Italian-League legend credits ex-Rockets point guard Chris Paul on hitting clutch shots down the stretch in his 26-point performance.

D’Antoni still does not know when a nine-time NBA All-Star Russell Westbrook will be back as he continues rehabbing his right quadriceps.

The Rockets still own a 2-1 lead over the Thunder in their Western Conference first-round series: 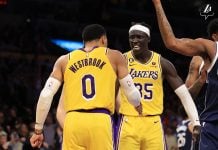