(Vancouver, WA – August, 20, 2020) Current NBA player Thad Young announced today his strategic investment in Shoot 360, a Vancouver, WA-based company shaping the future of basketball development using AI, diagnostic analytics and interactive technology. Young will also be involved with the company as a member of the Shoot 360 advisory board.

With nine training centers already operating in six states and more locations scheduled to open this year, Shoot 360 is the leader in leveraging technology and personalized coaching to improve basketball players’ skill and confidence. With proprietary Splash Zone technology, Shoot 360 provides instantaneous feedback on every shot and allows for players to make real time corrections to their shot. Shoot 360 has also gamified the training experience, allowing athletes in any one of their facilities to compete in shooting games against athletes in other facilities in real time.

Young is a 14-year NBA veteran currently playing with the Chicago Bulls. Prior to the Bulls, Young enjoyed stints with Philadelphia 76-ers, Minnesota Timberwolves, Brooklyn Nets, and the Indian Pacers. Young’s interests go beyond the basketball court as the founder of his private investment fund, Reform Ventures, focused on tech companies. “The future is being shaped by technology – it’s evolving the entire world. That’s really what made me want to get into Shoot 360 at the investor level. The added intrigue is the way they are strategically approaching their business model.”

Young also points out how Shoot 360 is revolutionizing the way basketball athletes train. “They’re using their technology to take the game to a whole new level – giving kids a new way to train through gamification. It puts kids in a position where they are able to pull their own data and see exactly what they need to work on and how they’ve been doing over time.”

Young’s investment in Shoot 360 follows the news of Jamal Crawford’s investment and partnership with Shoot 360. Other prominent partners include Rodney Stuckey, who operates a Shoot 360 training center in Kirkland, Washington, and Tim Grgurich, an assistant coach with nearly 20 years of experience in the NBA, who will also serve on Shoot 360’s advisory team.

Founded by Craig Moody in 2012, Shoot 360 is shaping the future of basketball development through the use of interactive technology that allows athletes to test, train, track and compete like never before. From training centers all over the United States, Shoot 360 provides the most technologically advanced and immersive basketball training and competition experience in the world, one that uses powerful training tools and performance metrics to quantify every player’s improvement in shooting, ball handling and passing. Shoot 360 is the place to maximize potential and to have fun while doing it. Shoot 360 is the future of basketball. 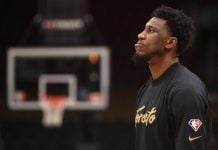 Why Khem Birch wants to watch film on Thad Young