The Brooklyn Nets have continued to impress since the season resumed in the Orlando bubble.

They stunned the Milwaukee Bucks in one of the biggest regular season upsets in NBA history, and pulled off another shocker against the Los Angeles Clippers yesterday.

Caris LeVert, Joe Harris and Jarrett Allen all played well with the majority of Brooklyn’s rotation out for the season.

The Nets have gotten contributions throughout their lineup though. Tyler Johnson has played well off the bench as has Timothe Luwawu-Cabarrot. Brooklyn’s ball movement and grit have allowed them to get wins with their star players out of the lineup.

Brooklyn has played inspired basketball since Jacque Vaughn took over as interim head coach and the Nets have to heavily consider keeping him as head coach next season.

The Nets will take on the defending champions Toronto Raptors in the first round of the postseason. No matter what happens in that series, this has been a surprising and impressive run for Brooklyn in the bubble. 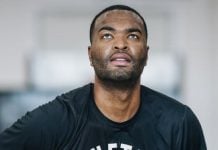