Euroleague and European basketball are coming back sooner than we expected. Euroleague announced two preseason tournaments in Kaunas, Lithuania and Valencia, Spain.

Panathinaikos Athens, Anadolu Efes, Armani Milan and Zalgiris Kaunas will be the teams that will travel to Kaunas to participate in the first tournament on September 12th-13th, 2020 in Zalgirio Arena. For the second tournament, Olympiacos Piraeus, Valencia Basket, Bayern Munich and LDLC ASVEL will fly to Spain and Valencia on September 15th-16th to test themselves and get ready for the upcoming Euroleague season.

The regular season tip-off is scheduled for October 1st and so those eight Euroleague teams will have the opportunity to warm up and be ready for a demanding yet exciting Euroleague season.

“We know how much our devoted fans have missed the Turkish Airlines EuroLeague. I can assure everyone that the EuroLeague has missed the fans, too,” Euroleague Basketball President and CEO Jordi Bertomeu said. “The WE’RE BACK PRESEASON TOUR not only shortens everyone’s wait for top-level game, but will also give players, staff, teams and us as a league a chance to prepare as necessary for the official games in October. Everybody wins with these two tournaments.” 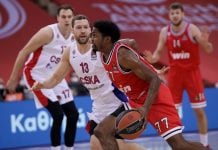